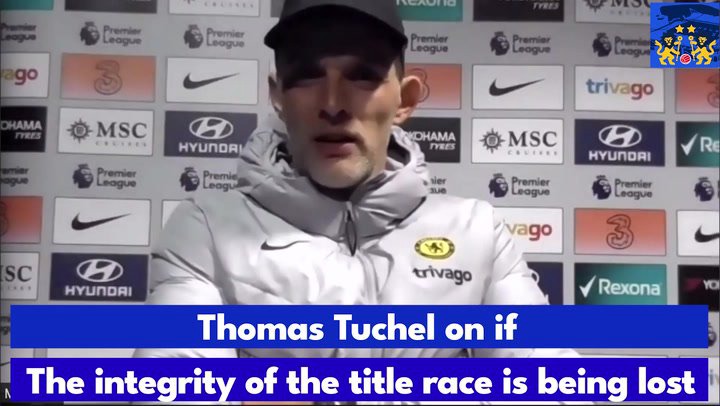 Draws, draws and more draws – is Chelsea’s title challenge over?

You can never say never, especially not in the Premier League and Chelsea are still second in the table but now eight points behind a rampant Manchester City at the summit of the table.

Pep Guardiola’s side don’t look like losing any time soon and the sight of Reece James leaving Stamford Bridge on crutches after the 1-1 draw with Brighton on Wednesday was somewhat symbolic – Chelsea are limping along.

Be it the brutal schedule of nine games in December, the mountain of injury issues that only increased on Wednesday night, the Covid outbreak that swept through Cobham – they have all been contributing factors.

Drawing four of their last five home games hasn’t helped either. The Blues haven’t been able to get past Burnley, Brighton, Everton or Manchester United on their home patch in recent weeks.

They have all been by the same 1-1 scoreline as well. In all of them, Chelsea had chances to win them and kill the game off but didn’t take them. That said, Brighton especially deserved at least a share of the spoils from their visit to SW6, if not even more.

Thomas Tuchel has kept a calm lid on things despite seeing his side decimated by injuries and Covid, the Premier League refusing the game against Wolves to be postponed and being forced to play players coming back from long-term injuries far more than his medical staff had advised.

That lid well and truly blew off on Wednesday night at his post-match press conference after his side conceded a 91st minute equaliser to a deeply impressive Brighton outfit.

The Blues are one of only two teams to play their full quota of games so far this season, the other being Man City who have won ten games in a row to saunter to the top of the Premier League.

So, are Chelsea out of the title race? Perhaps not just yet but the look of Romelu Lukaku, who scored for a second successive game, standing with his head in hands for two minutes after the full time whistle, Mateo Kovacic down on his haunches near the centre circle, they knew this was a costly result.

This mid-season slump for Tuchel and Chelsea has been brutal and has seen them fall off the pace at the top. Trying to catch City at any point is going to be demanding, like alone when they have eight of them ahead of you.

A bad week for the defence got even worse

Firstly it was Thiago Silva, picking up a hamstring injury in the Boxing Day win at Aston Villa. Then a couple of days later, Chelsea confirmed that Ben Chilwell will be out for the rest of the season after opting for surgery on his injured knee.

Tuchel then lost the hugely influential Reece James to a hamstring injury in the Brighton draw and left Stamford Bridge on crutches. Andreas Christensen’s ongoing back problems reared their head again in the first half and was withdrawn at the break.

Tuchel has one fit wing-back in Marcos Alonso and three fit centre backs in Trevoh Chalobah, Cesar Azpilicueta and Antonio Rudiger. Malang Sarr could be forced into action sooner rather than later as well.

The loss of Chelsea’s wing-backs especially has been cataclysmic. Chilwell was in the form of his career before his ACL injury a couple of months ago, while James – filling in at left wing-back versus the Seagulls to give Alonso a rest – has perhaps been Chelsea’s player of the season.

It’s not like they have easy solutions either to their wing-back problem, an area that is of huge importance to Tuchel’s system. The Blues can recall Ian Maatsen or Emerson Palmieri from respective loan spells, or make a move for Everton’s Lucas Digne or perhaps Barcelona’s Sergino Dest.

January is a dreadful time to try and do business, Maatsen hasn’t played Premier League football for Chelsea and Palmieri has played more away from Chelsea than he has for his current employers.

Tuchel will be desperately hoping James’ hamstring injury is just a tweak and not a tear, Thiago Silva likewise though the Brazilian was certainly able to get out of his seat on the bench in midweek bark encouragement to his defenders.

There really is no easy answer for Tuchel and as he said post-match: “I don’t know what I can expect from my players in terms of physicality, intensity or minutes. Nobody knows anymore because we have never done something like this. We play trial and error and see what I can do. I will protect my team. We can play better but we need the full squad over weeks and weeks.”

Trial and error when you’re fighting for a Premier League title and other trophies is not the way to go, yet it is the hand the German head coach has been forced.

The Blues might have lost Antonio Rudiger as well had referee Mike Dean not perhaps been a tad lenient following a first half lunge by the Blues defender on Tariq Lamptey.

Rudiger certainly had two feet off the ground as he went into challenge former Chelsea academy graduate, getting some of the ball but a fair bit of Lamptey too.

At half time, Rudiger went over to Dean and shook his hand, perhaps realising he might have just got away with one. A red card there and Chelsea really would have been in dire straits defensively ahead of Sunday’s visit of Liverpool to west London.

Ask Chelsea fans what they could have hoped for from 2021 and the reply would, hopefully, be overwhelmingly positive.

At worst, they could start the new year third in the Premier League table, the Champions League trophy in their collection for a second time, the UEFA Super Cup silverware too and 12 points better off than where they were this time last year, that’s not bad.

Yet we know, at Chelsea, things can turn quickly. Just ask Frank Lampard.

The Blues are very much in a slump and there has been a number of contributing factors to that. It’s one they will have to fight tooth and nail to get out of it and they will need their luck to start turning a bit.

Not having Timo Werner available still, who Tuchel said was “not good” after contracting Covid a couple of weeks ago, would be a start but that was a worrying update from the head coach. Werner isn’t in training and there is no timescale on his return.

Chelsea can no longer put such a heavy reliance on N’Golo Kante, who again pressed into action on Wednesday night when he perhaps shouldn’t have been. The fantastic Frenchman is a cheat code but he is starting to show signs of frailty.

Jorginho is in dire need of a break as well after toiling yet again through another 90 minutes. Rudiger could probably do with one too, so could Alonso and a few other candidates as well.

The Club World Cup is on the horizon, a competition Tuchel desperately wants to win, but there is the Carabao Cup, FA Cup and the remainder of the Premier League and a Champions League quarter final against Lille to take care of as well