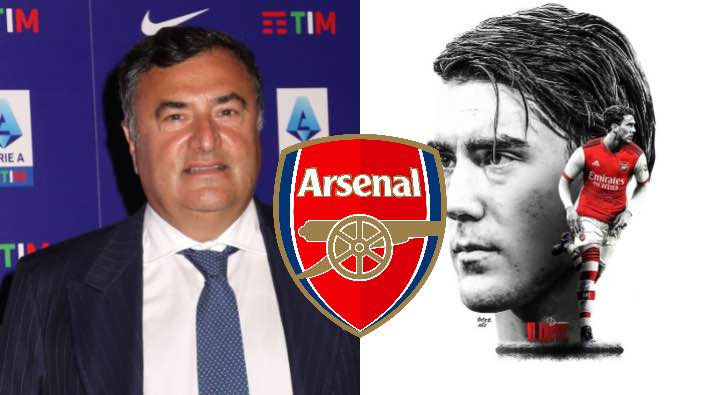 Fiorentia director Joe Barone has confirmed the club been in contact with an unnamed Premier League side over the possibility of signing striker Dusan Vlahovic, with the Serie A side willing to sell.

Since October, Arsenal have been monitoring the 21-year-old striker, with Mikel Arteta view the Serbia international as a centre-forward who capable of improve his squad.

In order to get the deal done, Arsenal technical director Edu Gasper has been working hard since first week of January transfer window, with the London club have already submitted lucrative offer for Italian giants.

Early this week, reports in Italy suggested that Mikel Arteta’s side submit official offered worth £68million for the highly-rated forward, who scored 24goals across all competitions this term.

The reports explain in details that Vlahovic and his agent yet to made final decision regarding the proposal due to primarily agree to join Juventus next summer.

However, Fiorentia director Joe Barone has confirmed only English club held productive talks with them over Vlahovic deal, and there’s no any club in Italy contact them regarding the situation.

‘There has been no communication from the player and his agent, although I asked them to be clear about their wishes.’

The Gunners interest in Vlahovic has long been met with speculation claiming the striker is not interested in joining a side where not playing Champions League football is a realistic possibility.

Arsenal are be willing to break the bank on Vlahovic when it comes to the striker’s wages, with the north London outfit proposing a five-year contract that would see the 21-year-old pocket £8.3m a season on top of a huge signing on-fee.

Meanwhile, another reports confirmed this evening that, Arsenal have agreed terms with Fiorentina and are said to be willing to part with a sizeable fee to ensure Vlahovic’s agency are satisfied.

The striker is said to be impressed with offer of £160,000 a week and is now Seriously Considering transfer to Arsenal