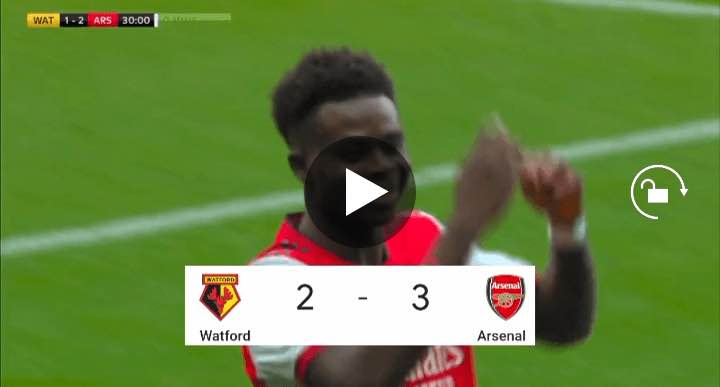 Arsenal have moved up to fourth place in the Premier League table after secured narrow victory over northwest side Watford at Vicarage Stadium on Saturday evening.

The Gunners made impressive start to the game and found themselves lead inside five minutes through Martin Odegaard. The attacking midfielder delivered a superb finish following a lovely move involving Bukayo Saka down the right.

Watford then made quickly response as Cucho Hernandez scored eye-catching goal to put the host back on track. A ball is crossed in miles behind the Hornets forward but he stretches to pull off an overhead kick into back of the net.

Bukayo Saka restored Arsenal lead with a spectacular goal. The Englishman win the ball back off Cleverley and after a one two with Lacazette he hammers home from the edge of the box.

Gabriel Martinelli made it 3-1 in early second-half. The Brazilian forward finishes the fluid passing move in style which saw Mikel Arteta himself feed Bukayo Saka to take a quick throw in.

Moussa Sissoko, then delivered a lovely goal 10th minutes into the game but Mikel Arteta’s men maintaining the contest till end of the match.

Victory over Watford at Vicarage Stadium, mean Arsenal have recorded fourth straight win in the Premier League and moved up to fourth place on league standings