The Blues’ first game after the transfer window closes against West Ham could be very different, and the latest developments point to two attacking signings.

Chelsea’s summer transfer window will be filled with many more twists and turns.

After a sluggish start, Arsenal, Tottenham, Liverpool, and Manchester City all made significant signings of their own.

Todd Boehly, the new owner, has responded in kind with what he has done thus far and what is expected to come.

So far, more than £150 million has been spent on Raheem Sterling, Marc Cucurella, and Kalidou Koulibaly, with two more first-team signings and two more for the future in the form of Carney Chukwuemeka and Gabriel Slonina.

Malang Sarr’s departure was the most recent to be announced in terms of departures. Timo Werner’s return to RB Leipzig has been confirmed for £25 million.

Marcos Alonso’s Barcelona announcement is on the way, with the Spaniard simply waiting for the Catalan giants to resolve their dispute with La Liga before confirming his departure.

Despite the fact that AC Milan’s talks have ceased, Hakim Ziyech intends to continue pushing for a departure.

All of this means that more signings are still to come, and negotiations for Wesley Fofana, Frenkie de Jong, and Pierre-Emerick Aubameyang are ongoing.

SportsDias now predicts a best front three with the former Arsenal man, but if the latest rumours are to be believed, another attacking addition may join him.

According to talkSPORT, the club is being urged to make a late move for Crystal Palace winger Wilfried Zaha, with owner Boehly confident of securing a ‘cut-price’ deal for a player with one year remaining on his current contract.

Alternatively, the Eagles are reportedly interested in both Conor Gallagher and Callum Hudson-Odoi, implying that a similar situation to that which occurred with Brighton earlier this summer could occur here.

With all of this in mind, SportsDias forecasts a best front three formation featuring both Aubameyang and Zaha. 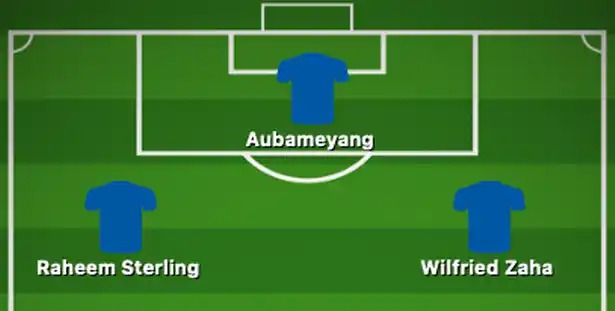 All new signings would begin in this formation: Aubameyang up front, Zaha on the right, and Sterling on the left. Mason Mount will either be dropped or moved back into a deeper role in midfield.

Kai Havertz would lose his starting spot to Aubameyang, a move Tuchel could make to improve the German, who struggled in pre-season and in the opening game against Everton.

Armando Broja would also have to be patient with opportunities, but this competition can only benefit his development as exit links to Newcastle and Leeds continue.