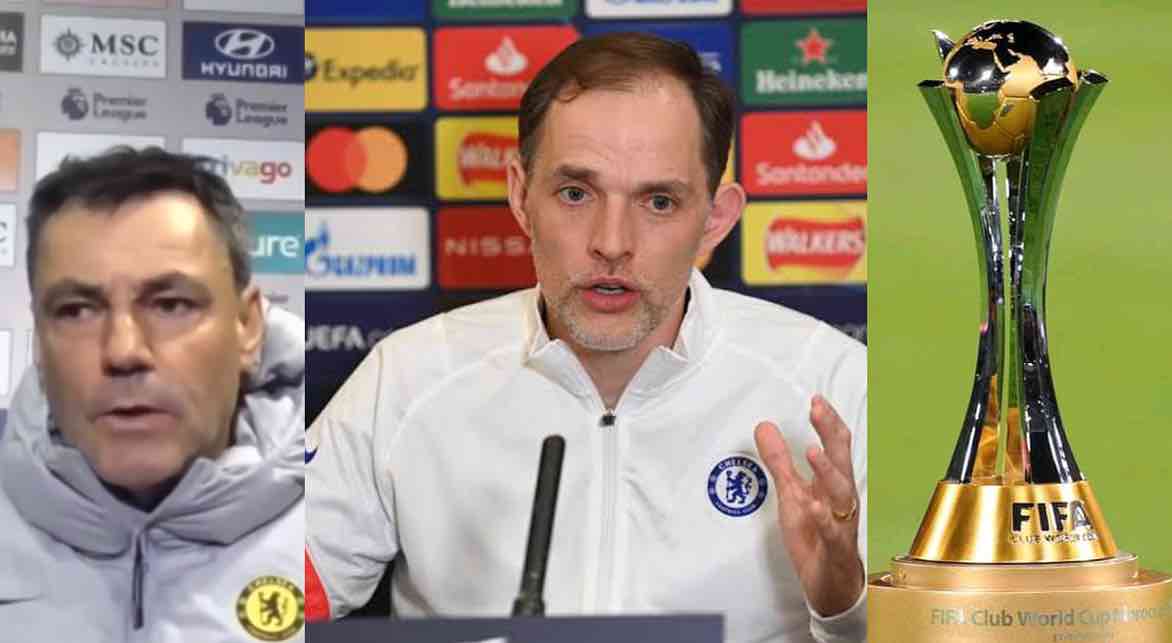 The Blues’ manager tested positive for Covid-19 ahead of their FA Cup win against Plymouth Argyle on Saturday and has yet been able to join his side in the United Arab Emirates.

Despite this setback, Tuchel has remained in contact with his staff and players ahead of their semi-final on Wednesday.

According to The Evening Standard, the German has been speaking to his assistant Arno Michels and fellow coaching staff whilst he awaits potential travel to their training camp.

As per the report, it is believed that he has sent them a clear message ahead of their fixture along the lines of ‘Don’t come back empty-handed.’

Chelsea secured qualification for the tournament thanks to their success in the Champions League last season, when they beat Manchester City 1-0 in the final to win their second ever title

Thomas Tuchel is in contact with his #Chelsea coaching staff and his message is clear: Do not come back from the Club World Cup empty-handed.

They last featured in the Club World Cup in 2012 but lost 1-0 to Corinthians in the final, meaning they will be looking to win the trophy at the second time of asking.

The Blues’ appearance in the tournament will be one of five different competitions they will feature in this month.

Victory against Plymouth has seen them progress to the fifth round of the FA Cup, and they will return to Premier League action when they make their way back to the capital against Crystal Palace.

Chelsea will then host Lille in the Champions League knockout stages, before ending the month with a trip to Wembley for the Carabao Cup final against Liverpool

That is motivation enough to reach Saturday’s final, which is expected to be against Palmeiras, who are firm favourites against Al Ahly today.

Tuchel is a man who rarely needs added incentive – just ask Chesterfield or Plymouth, who were confronted with Chelsea’s biggest stars in their recent FA Cup ties. But in the context of this season, the German will acknowledge the need to provide highlights like this as a gauge of the progress being made under him.

The club’s Premier League title pursuit is effectively over just past the halfway mark of the season. That is an historically uncomfortable position for any Chelsea manager to be in under Abramovich’s watch, which is why regular highlights, in between, will act as a helpful distraction for Tuchel in a campaign that still has plenty to offer.

The Champions League resumes in two weeks and there is another showpiece in the form of the Carabao Cup Final against Liverpool at Wembley on February 27.

While top four is an absolute minimum requirement, this season is now all about the cups.

The European Super Cup is already housed alongside last May’s Champions League triumph and the Club World Cup would make it a grand slam of international trophies to match the achievements of Bayern Munich, Liverpool and Real Madrid in recent years.

That is the type of company Abramovich wants to keep and even if the challenge of breaking Manchester City’s domestic dominance is still Tuchel’s priority, it will do him no harm to provide such benchmarks in the meantime.

It has been a bleak winter for Chelsea’s manager, one that has seen his title pursuit all-but extinguished, while he has faced the most searching questions of his short reign.

Whether or not he manages to make the trip to Abu Dhabi, it presents the chance of another highlight and the opportunity to reignite the campaign