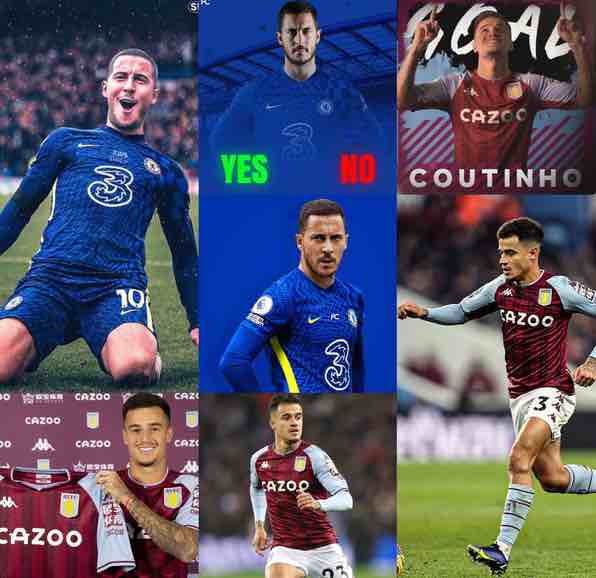 The former Liverpool player made his debut for Aston Villa this evening, the Brazilian winger got a goal and an assist within 14 minutes of playing.

Coutinho has been unlucky since he signed for Barcelona, the player failed to break into the first team and also ended up on loan at Bayern Munich.

During his loan spell at Bayern, he was able to win the champions league trophy and also had a wonderful season with the German side.

His development at Bayern fell short after he picked up an Achilles injury which saw him return to Barcelona.

Coutinho was a shadow of his former self as he tried every possible best to rediscover his form with Barcelona.

Lucky for him, Steven Gerrard demanded his services at Aston Villa to renew his career and bring him back to the limelight.

His resurrection journey has started with a wonderful performance against Manchester United and this has raised a lot of questions concerning his compatriot Eden Hazard who went sideways.

From analysis, Hazard might be having the same problem as Coutinho. Both players moved from the premier league which seemed to have a very fast pace to a league with slow and steady football.

Hazard has failed to make his mark at Madrid, this is due to injuries and also the coaches selection.

Chelsea needs to reconsider resigning Hazard as the wingers at the club have proven to be less effective.

It was evident with their performance against Manchester City this evening, the wingers lacked creativity and couldn’t make runs with the ball which Hazard finds delight in doing always.

Hopefully, the transfer board can reconsider and recall him back to the club just as Coutinho has proved that he still can do wonders with the ball at his feet.