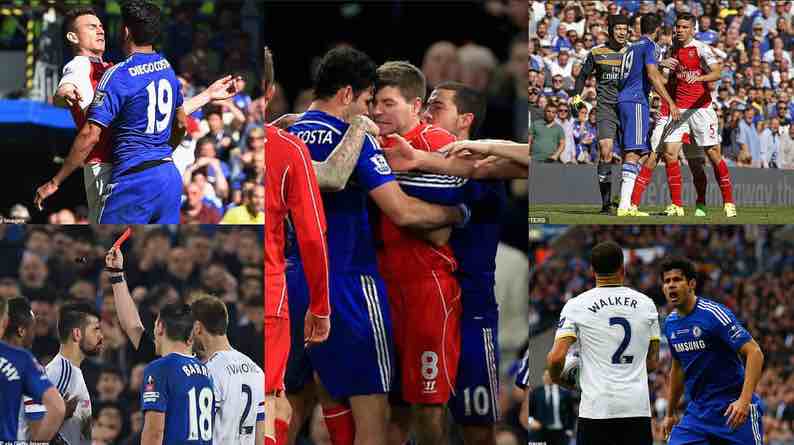 Interested clubs beware: Diego Costa is looking for a new club following the termination of his contract at Brazilian outfit Atletico Mineiro.

The Spanish-Brazilian forward brings chaos and calamity everywhere he goes, alongside a knack for scoring goals of course.

His latest career move has raised speculation as to whether he could make a return to the Premier League – the hunting ground where he frustrated many and stole all the headlines during a three-year stint at Chelsea.

Recent reports have even linked the 33-year-old forward to Arsenal, the club who hated him most during his time in England after he wound up their defenders to an early bath and put many goals past the Gunners goalkeepers.

With Costa plotting his next move in football, Sportsmail looks at Costa’s most eye-catching moments in his career…

Perhaps Costa’s strangest afternoon of football came during Chelsea’s FA Cup quarter-final defeat by Everton back in 2016, where the striker was sent off for two bizarre clashes with Toffees midfielder Gareth Barry.

The two players started their feud in the first-half when Costa basically jumped into the back of Barry, with the Chelsea striker proceeding to roll around the floor as if he was the one fouled.

When referee Michael Oliver gave the free-kick to Everton, Costa was straight up off the ground after his theatrics and his remonstrations earned him a first booking of the afternoon.

With Costa’s Chelsea being frustrated in the second-half when Romelu Lukaku netted a brace to put Everton in control, Costa saw red – literally. Another scrap with Barry saw the forward try to head-butt the midfielder – and then appeared to attempt a bite on his neck.

Costa then went to cuddle Barry but those niceties couldn’t get him out of a second yellow. The Chelsea striker had an early bath and while Barry joined him later on in the game for a cynical foul, it was an incident which did not look good on the Blues star.

TAKING ON THE WHOLE OF LIVERPOOL

Everton’s Merseyside rivals Liverpool also got their fair share of Costa chaos over the years, with the 2015 League Cup semi-final seeing things boil over between the Reds and the Chelsea striker.

The second leg at Stamford Bridge was finely poised following a 1-1 draw at Anfield but the Spanish-Brazilian striker tried to bully his Blues side into the final.

In short, Costa tried to take on the entire Liverpool team in several toxic battles. Two of them came in the first ten minutes, as he appeared to stamp on Emre Can near the touchline before fouling captain Steven Gerrard and riling him up by sitting on him for a few seconds.

In the second-half, Costa appeared to strike again when he left a little bit too much on Martin Skrtel following a 50:50 challenge, which once again did not please the Liverpool side.

This time, Costa’s Chelsea ended up on top, as Branislav Ivanovic’s extra-time header earned the Blues a trip to Wembley for the final, but not without a whole lot of trouble.

While at Atletico Madrid, Costa enjoyed battling Real defenders in the city derby. Captain Sergio Ramos was his main target, with the striker targeting him not once, but twice!

The first major feud between Ramos and Costa came in December 2012, when the pair were embroiled in a battle of spit.

When the two players squared up, Costa tried to heabutt Ramos, who then appeared to spit at the Atleti striker first, but the former took it way too far after that.

Away from the referee’s view, the forward appeared to load his hand up with saliva before throwing his hand in the direction of the Real centre-back.

Ramos had the final laugh, however, as his Real side won that Madrid derby 2-0 thanks to goals from Cristiano Ronaldo and Mesut Ozil – but it wasn’t long until those two clashed again.

The 2018 Super Cup saw Ramos and Costa lock horns again, with the Atleti striker clearly kicking the Real defender in the head during a tussle. This time, Costa ended up on the winning side, with his brace helping Atleti to a 4-2 victory in Estonia.

Arsenal fans hated the sight of Diego Costa – and they had good reason to.

The Spanish-Brazilian scored four goals in seven matches against Arsene Wenger’s Gunners, which comprised the winner in the 2018 Europa League semi-final in Atleti colours, goals in two Premier League victories for Chelsea and a strike in the 2017 FA Cup final.

But it was his September 2015 clash with Brazilian defender Gabriel Paulista which pushed Arsenal fans over the edge in terms of their hatred for Costa.

With a close game locked at 0-0 towards the end of the first-half, Costa appeared to swipe Arsenal defender Laurent Koscielny in the face while challenging for an aerial duel. Koscielny reacted in anger and was barged over by Costa, which brought over Gunners defender Gabriel.

The Brazilian centre-back squared up to Costa – with both players earning themselves a booking. The Chelsea striker, however, kept antagonising Gabriel in the seconds that followed – and the Arsenal man eventually snapped.

Gabriel tried to sneakily kick out at Costa in the next phase of play but referee Mike Dean spotted it. The Gunners defender was sent off by Dean and Chelsea went on to win the game 2-0 in the second-half.

GETTING SENT OFF… IN PRE-SEASON

Diego Costa does not do pre-season. Especially when you place a Madrid derby in the early season schedule.

Real and Atleti were drawn together in the 2019 International Champions Cup and their New Jersey showdown certainly did not disappoint.

A bizarre 7-3 win for Atleti saw Costa score four times in 50 minutes, before being sent off just after the hour mark.

The Spanish-Brazilian striker was not happy with his quadruple helping of goals, he just needed to scrap somebody. When Real defender Dani Carvajal swiped at his Atleti team-mate Thomas Lemar, that was the final straw.

Costa then took out Carvajal with a sweeping kick and a mass brawl ensued. Both Carvajal and Costa were sent off for their respective roles in the scrap, in one of the more memorable pre-season encounters in recent years.

Life did not always go Diego Costa’s way and one bruising trip to Stoke City in November 2015 showed what can happen when the former Chelsea forward did not get what he wanted.

Costa’s Chelsea were beaten 1-0 at the home of the Potters, with the forward enjoying a tussle with Stoke defender Ryan Shawcross throughout the game.

Elbows were flying in the early periods of the game, but it was one humorous set of jibes in the second-half which grabbed the attention.

Costa took on Shawcross with a drive forward in the Stoke half before going to ground too easily under the defender’s tackle. Costa got up, frustrated at the lack of a free-kick, before gesturing to Shawcross that his body odour was not to his liking.

Shawcross’ Stoke ran out winners come the end of the game but ‘StinkGate’ was far from over. The defender’s wife, Kath, revealed on social media that she had told her husband to put on deodorant that evening, while Shawcross was handed a year’s worth of body spray by BBC Radio Stoke.

When Costa was concentrating on me and not the game, then the battle was won,’ Shawcross said at the time. ‘He is a top player and I was pleased to keep him quiet.’

Costa’s final acts as a Chelsea player was to deliver the 2016-17 title to Stamford Bridge in their first season under Antonio Conte.

The Blues sealed the deal with a 1-0 victory away at West Bromwich Albion in May 2017, with Costa’s 20 Premier League goals the main catalyst for the title arriving in west London that season.

Yet it was his post-title celebrations at the Hawthorns that grabbed the headlines, with Costa going beserk in the Chelsea dressing room.

The striker was caught grinding on one member of the Chelsea’ backroom staff and when he was drenched in all sorts of liquid in the changing room, he was seen drying his eyes out with, er, Lucozade Sport.

Costa then crashed Conte’s press conference and begged the media to end the conversation as he was desperate to get back to west London. When the Italian manager was called to do more media duties, he threatened to let a fire extinguisher off by hanging it over the heads of the reporters questioning Conte in a huddle.

Mad, manic and mesmerising – that is Diego Costa in a nutshell.

Like Loading...
Related Topics:Diego Costa's MADDEST moments as he becomes a free agent once again - could he back in England?