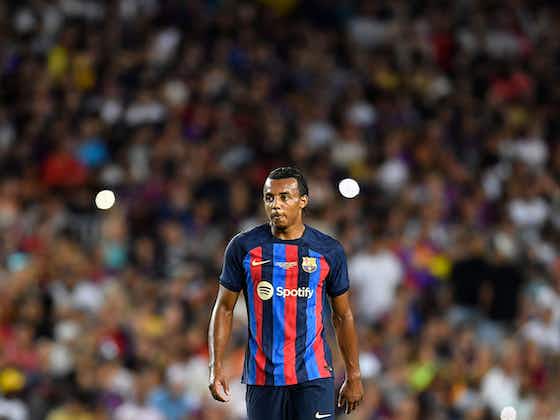 Barcelona fought off interest from Chelsea to complete the signing of Jules Kounde from Sevilla this summer. The fee is reportedly in the €50 million (plus add-ons) region, which is inarguably a bargain for a player of the Frenchman’s stature.

As is tradition, Kounde spoke to BarcaTV for his first official interview after joining Barcelona. The man has big dreams and commands a strong presence off the pitch as well.

“I’m very happy, but that does not end here. I am at Barcelona, great. But I want more, I want to be important and I want to win titles. That is what motivates me the most. With the team we have, we have to compete for every single title.”

“As a child, I hated losing. I still do, but I deal with is differently now. I understand that sometimes you win, and sometimes you lost. You need to stay calm,” Kounde added.

The 23-year-old shares a special relationship with Real Madrid’s Aurelien Tchouameni and Karim Benzema, but also made sure to contact Ousmane Dembele when he heard about Barcelona’s interest.

“I spoke to Ousmane [Dembele] when I understood Barcelona was my preferred option. However, that really convinced me was the exciting and ambitious project.”

Barcelona had fallen through European spots under Ronald Koeman’s reign, but Xavi helped them get back up, eventually finishing second in the table. Their second half of the season was special, and Kounde acknowledged the same.

“The team I had to sign for was clear for me after Barcelona’s great moments in the second half of last season.”

Kounde has been at Barcelona for a few weeks now, making his debut in the Joan Gamper Trophy against Pumas UNAM. Training under Xavi, the Frenchman spoke about the manager’s tactics for the defence.

“Xavi always wants high pressure. He wants us to leave a lot of space behind us in defence, so we need to be in good shape, physically.”

“When I heard of the interest about Barcelona and the manager, I did not hesitate,” Kounde said when told about how Xavi was especially stubborn about signing him.

Further, Kounde also revealed his conversation with the coach, who told him about his tactical setup and how he could be an integral part of the puzzle.

“Xavi told me that I was perfect for his system. We talked about football a lot. It’s Xavi, and he was one of the best players ever. The conversation was very good, natural. That is always a good sign.”

He topped this off by saying, “I’m in love with the Barcelona style. I watch a lot of football.”

Kounde will unquestionably go down as one of Sevilla’s best players in recent years. Since his move from Bourdeaux, the Frenchman has been linked with an exit, and always to the big dogs. After three years though, it was time to finally move on.

“It was the time to make the move. I waited until I was ready. More matches, experience in La Liga with a play style I like. I know the teams, their players, their forwards.”

Barcelona and Kounde’s history does not start or end with this transfer, though. He has had a handful of superb performances against the Blaugranas. And of course, who can forget his superb solo goal vs Ronald Koeman’s side in the Copa del Rey.

“My goal against Barca was a ‘golazo’. It shows my ability in possession. I’ve always had the freedom to come out with the ball like that. It’s my favourite goal that I’ve ever scored.”

Kounde has always had the chance to go toe-to-toe against Barcelona’s marquee signing Robert Lewandowski when Sevilla faced Bayern Munich in the UEFA Super Cup in 2020.

The Bavarians ran out winners 2-1 with goals from Leon Goretzka and Javi Martinez, but Sevilla took the game to extra-time, with Kounde showing exemplary defensive astuteness.

“When I played against Lewandowski, I was sad because we lost. But I was happy with my good performance. I like to face the best players. Robert is a complete striker, he has everything. I prepared myself very well and was very concentrated.”