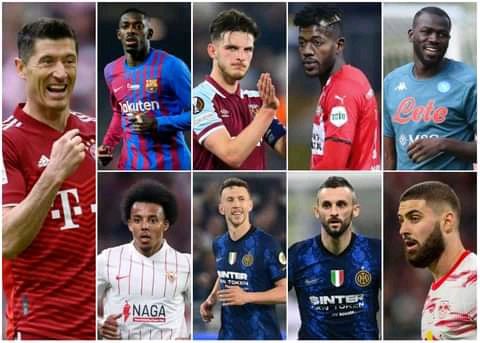 Chelsea Manager Thomas Tuchel has confirmed that his squad would be going through a rebuilding process this summer, which means they could see a lot of players leave the club this summer, and several top new additions in the transfer window.

Todd Boehly is believed to be a very ambitious owner, and reports claims that he is prepared to splash cash on A–list signings in the upcoming transfer window this summer, to support the rebuilding process of the team.

Jules Kounde is not a new name for the Chelsea fans, as he was close to moving to Stamford Bridgelast season, but the deal collapsed towards the end of the transfer window last summer.

The defender was believed not to be happy with the way the deal fail to happen last summer, Chelsea are expected to enter the race for the defender again this summer, after having another brilliant season with Sevilla in the 2021/22 football campaign.

West Ham United midfieder Declan Rice has been on the Chelsea radar since the last two summer, Thomas Tuchel is also believed to be a fan of the Central midfieder, and would like him to join his side next season. Rice was a former Chelsea academy player, and have a strong friendship with Mason Mount, which could influence any possible deal for him to join the Thomas Tuchel’s side this summer.

33 years old Inter Milan winger Ivan Perisic has been linked with a move to chelsea this summer, after running down his contract with the Italian club.

Chelsea are reported to be looking for a left wing back deputy for Ben Chilwell next season, which is why Perisic has been one of the names that could join the club this summer.

Bayern Munich striker is believed to be interested in leaving the Bundesliga Champions Bayern Munich this summer, with Barcelona his most likely option, but Chelsea could have a chance to sign the player this summer, due to Barcelona’s financial struggles. Thomas Tuchel would hope to stop the dominance of Manchester City and Liverpool next season, and he would need a prolific goal scorer like Lewandoski.

Chelsea are in need of defensive reinforcement this summer, as they are preparing for the departure of two of their top central defenders Antonio Rudiger and Andreas Christensen. RB Leipzig defender Josko Gvardiol has been tipped to be a perfect replacement for Antonio Rudiger next season.

Napoli defender Kalidou Koulibaly is another central defender who has been linked with a summer move to chelsea this summer.

Napoli are looking to cash-in on the defender this summer, as Chelsea could be the perfect club for him to join this summer.

Ibrahim Sangare is a PSV defensive midfieder who has been linked with a move to chelsea this summer, Sangare enjoyed a brilliant season for PSV this season, and has been tipped to be an alternative for Declan Rice. Barcelona winger would be available as a free agent this summer, as his current contract with the Spanish club would expire on 1st of June.

He has been linked with Chelsea to link up with his former manager Thomas Tuchel this summer.

Inter Milan central defender is another player who has been linked with a move to Chelsea this summer. The Italian club would be looking to sell some of their top players this summer for financial reasons, and Milan Skriniar could be one of the player that could be sold.