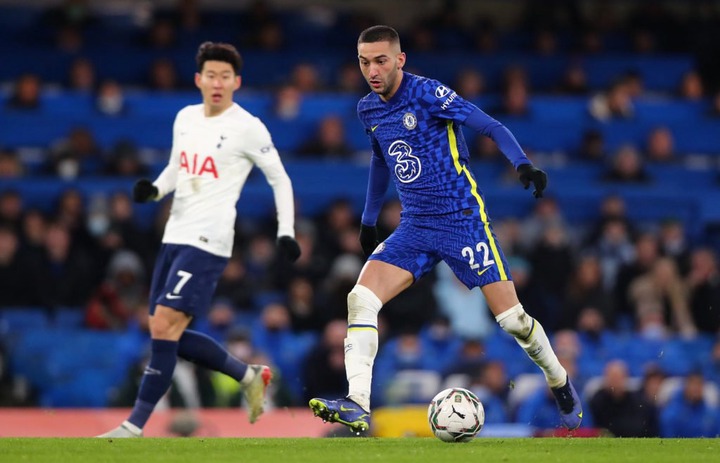 As quoted by the club website, Ziyech suggested that Spurs struggled to cope after the Blues switched from a three-man defence to a flat back four.

Why did Chelsea change formation?

Due to another wave of covid and injury absences, Thomas Tuchel was forced to tinker his side once again.

This meant making six changes from the epic draw with Liverpool just three days before.

One of the main modifications was to deploy Ziyech as an unorthodox wing-back in the first half.

The Moroccan arguably had his best evening in a Chelsea shirt whilst undertaking this relatively new role.

He provided the cross that caused Tottenham’s calamitous own goal and was a general menance down the right-flank.

After the interval, the 28-year-old moved into a more advanced position whilst the team transitioned into a back-four.

Although the Blues failed to score in the second-half, they shut out Spurs almost entirely.

“It was a bit different than usual. We had four at the back, normally we have five, so that gave us more opportunities up front,” said Ziyech on mixing up the method.

“They didn’t know whether to follow the midfielders or step out. That was the biggest win for us.

“We had some difficult games, some injuries, Covid, but how we have dealt with it as a team is pretty good.

“We have got on the right track, and now let’s keep focused.”

Big boost for the Blues

Beating Tottenham is always a bonus.

Romelu Lukaku did not receive a frosty reception from the Stamford Bridge crowd, which is testament to those who sat in the stands.

Plus, the likes of Saul Niguez and Malang Sarr both performed admirably on their rare outings.

A fine evening all round in the capital for the boys in blue.