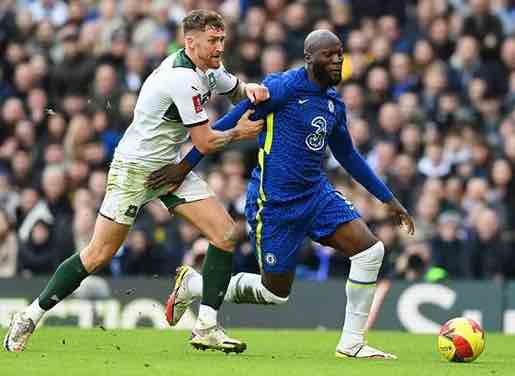 Chelsea secured an important win in their FA Cup clash against Plymouth at Stamford Bridge earlier this afternoon.

It was a really poor performance from Thomas Tuchel’s men as they failed to break Plymouth’s resilient defence in normal time.

Chelsea were forced into extra-time before they could manage to find the breakthrough. Alonso’s brilliant strike in the 105th minute seems enough to book a place for Chelsea in the next round.

It is easy to blame Chelsea’s poor performance on the absence of their manager who missed the clash due to Covid-19. However, the shambolic display of Hudson-Odoi and Lukaku shouldn’t go unnoticed.

Hudson-Odoi and Lukaku were clearly Chelsea’s worst players against Plymouth. Both players made no significant contribution throughout their time on the pitch.

Lukaku had just 15 touches, created one chance, lost two duels, and couldn’t manage more than one shot on target despite being on the pitch for 120 minutes. Just like Romelu Lukaku, Hudson-Odoi was not a threat to Plymouth’s defence all through his time on the pitch. Though, he was quickly subbed off in the second half but his performance in the first half was far from impressive.

Hudson-Odoi had one shot, created one chance, lost four duels, and completed just 78% of his total passes against Plymouth.