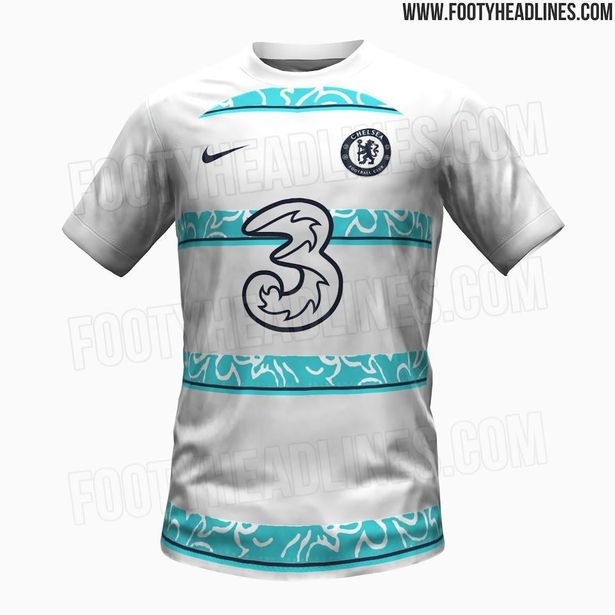 Chelsea fans have been left in uproar after leaked images of next season’s away kit emerged online.

The Blues are currently locked into a long-term manufacturing deal with sporting giants Nike. Chelsea penned a staggering 15-year agreement with the American company back in 2016 in a deal that’s estimated to earn the Londoners around £60million a season.

But that mega-deal hasn’t stopped Blues fans from venting their anger online on more than one occasion over the past couple of seasons.

And fans have been left raging again after seeing Nike’s latest offering for the 2022/23 season.

The away kit, which was revealed by kit news website Footy Headlines, is predominantly white with striking teal hoops and a subtle navy trim.

But the bold new design hasn’t gone down well with the Stamford Bridge faithful – who were left similarly incensed just two years ago by a red-and-blue-themed third shirt.

And a number of Blues fans have once lashed out online.

One fan labelled the kit as a “Monstrosity!” while another declared: “Surely f****** not. Hope we never go with Nike ever again at this point”.

Other fans took the opportunity to call on Chelsea to end their lavish deal with Nike after seeing the design. One fan tweeted: “Nike not even pretending to try anymore with our kits. Bring Adidas back”.

Although Chelsea fans have been left unhappy off the pitch, things have generally been more positive on it this season.

Blues boss Thomas Tuchel has the Londoners firmly in the race for the Premier League title after steering the Stamford Bridge side to an unexpected Champions League triumph back in May.

But the German has come under pressure himself in recent weeks after overseeing a torrid run of form.

Sunday’s 3-1 victory over Aston Villa has temporarily stopped the rot and Tuchel’s men have a chance to build on that result when they host Brighton on Wednesday night.

The European champions have been boosted by the return of club-record signing Romelu Lukaku; who found the net against Villa at the weekend after a spell on the sidelines