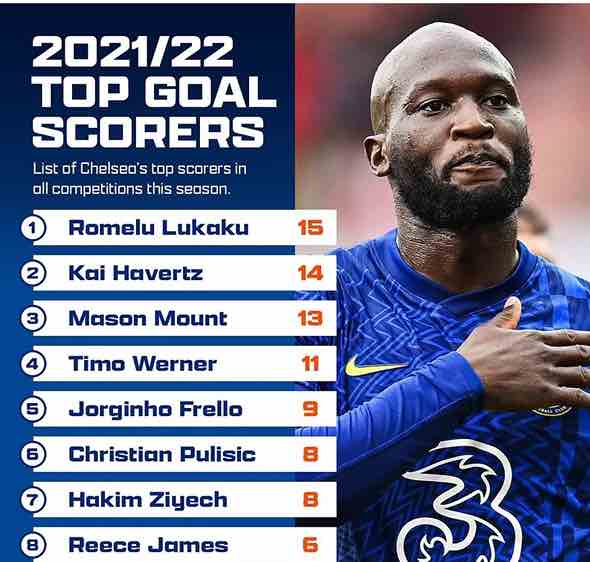 Chelsea ended their 2021/22 Premier League season in the third position. The blues failed to win any silverware despite reaching the FA cup and League cup finals. Chelsea scored 76 premier league goals in the 2021/22 season and Romelu Lukaku is their highest Goalscorer across all competitions. Chelsea had 21 different scorers this season and only four of them were able to score over 10 goals. Kai Havertz, Timo Werner, Romelu Lukaku and Mason Mount are the players in question.

Three of Chelsea’s defender made the top ten list. However, Reece James is Chelsea’s most scoring defender while the other two are Antonio Rudiger and Marcos Alonso. Chelsea are likely to loose Rudiger to Real Madrid this summer, while Alonso has been linked to Barcelona. These three defenders scored more goals than most Midfielders in their team. This shows that Thomas Tuchel’s tactics has favoured every player in terms of scoring goals. Jorginho whose duty was to play penalty for Chelsea scored nine goals across all competitions. He was the top scorer for Chelsea last season and couldn’t score upto 10 goals. Chelsea has been unable to provide players who could score over 20 goals across all competitions. The last strikers who were able to reach these figures for Chelsea were Didier Drogba and Diego Costa. Moreso, Lukaku could move away from Chelsea this summer as he once blamed Tuchel’s tactics as the reason for being unproductive this season. Hudson-Odoi, Cesar Azpilicueta, Ben Chilwell and Thiago Silva all scored the same number of goals. This shows the competition level between players in terms of productivity.

Ross Barkley 91st winner against Watford to made him the 21st player to score for Chelsea in the 2021/22 season. He scored the same number of goals as Saul Niguez and Loftus-Cheek. However, Chelsea will likely not sign Saul Niguez permanently as his performance during his loan spell was not convincing.