Without much doubts, Chelsea football club will most definitely aim towards further strengthening their current squad under manager Thomas Tuchel when transfer window opens.

The West London club have enjoyed an interesting 2021/2022 season so far and are currently occupying the 3rd position on the Premier League table after 37 league matches.

And as the season draws to a close, it is believed that Chelsea are already looking into the transfer market as they aim to improve their squad and compete for trophies next season.

Chelsea football club want to improve their options in midfield and have been linked with a move for highly-rated young Eintracht Frankfurt defensive midfielder Luka Hyrylainen.

The 17-year-old Finland International, who joined the Eintracht Frankfurt academy back in 2020 has been an important member of the youth squad over the season.

The young defensive midfielder was quite involved for the Eintracht Frankfurt academy during the 2020/2021 season where he made five appearances in all competitions.

Luka Hyrylainen has been very much involved for the Eintracht Frankfurt academy so far this ongoing 2021/2022 season, scoring two goals and providing three assists in the 17 matches he has played. 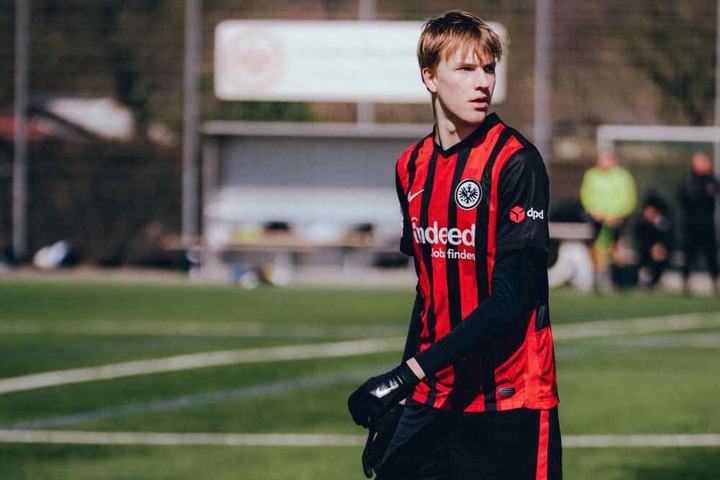 His impressive performances despite his young age has caught the attention of Premier League side Chelsea and according to reports from The Sun, the Blues are keen on signing him.

The reports further claimed that Chelsea wants to sign a new defensive midfielder when the transfer window opens and are now eyeing a move for the young Luka Hyrylainen.

But then, it remains to be seen if the highly-rated Luka Hyrylainen will choose to continue his developments at Eintracht Frankfurt or he will be interested in a move to join Chelsea when the transfer window opens.