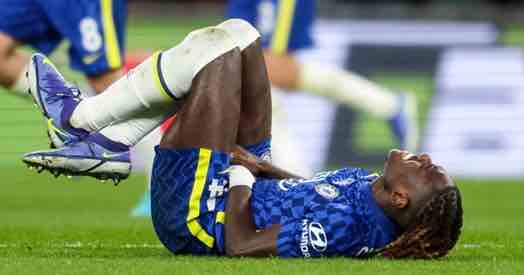 The player had to have “surgery” in the Wembley dressing room to get his wedding tackle stitched up.

Thomas Tuchel has revealed Trevoh Chalobah had to have “surgery” in the Wembley dressing room to get his wedding tackle stitched up.

Chalobah was left in excruciating pain after an X-rated challenge by Liverpool ’s Naby Keita during the Carabao Cup final on Sunday.

Chelsea defender Chalobah was fuming at referee Stuart Attwell for not taking action after he was left with a nasty gash in his groin area.

But Chalobah bravely played on and could be in the squad to face Luton in the FA Cup on Wednesday night after having stitches to the wound after the game.

Blues boss Tuchel said: “I would say he has shown some balls – but that would be the wrong line!

“I could not believe what I saw after the match. There was surgery literally in our dressing room and I am not joking.

“They were stitching him up. I could not believe it. After the match, after the press conference when I left they were doing the stitches, I just heard him scream. It looked horrible.

“I went in and saw it, it looked horrible and I could not believe he played one more minute with this kind of injury but he played the rest of the match and scored a penalty in the shoot-out.

“This is really big. But he was really brave to do this. You could not look away. They had surgery, there were stitches there. He was the only one with the doctors and I heard the noise.

“Seriously, it was a proper cut, very close to the area of the groin. It was open and it needed to be closed. He was very tough and he has my full respect.”