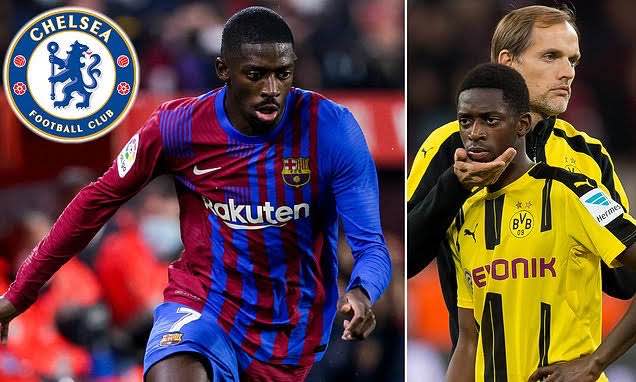 With Ousmane Dembele apparently rejecting a contract extension at Barcelona, a slew of European giants are likely to swoop in for a Bosman deal.

Paris Saint-Germain have been heavily linked with a bid for the Frenchman, but new sporting director Luis Campos is not a fan of the striker.

Chelsea has been put on high alert, with the Premier League giants considering landing the Barcelona superstar on a free transfer this summer, according to The Athletic.

Thomas Tuchel, Chelsea’s coach, has a great rapport with Dembele. During their time at Borussia Dortmund, the two worked together, with the player having enormous success and playing his greatest football under the German tactician’s guidance.

Tuchel is certain that he can assist Dembele rediscover his old form at Chelsea. With the attacker also being available on a free transfer, the Frenchman appears to be a tempting target for the Blues.

Apart from Dembele, The Athletic reports that Chelsea is keeping an eye on Sergino Dest, another Barcelona standout.

After all, the Blues are expecting a big exodus in the defensive unit this summer. Cesar Azpilicueta, their defensive lynchpin, has been linked with a move to Barcelona, while Andreas Christensen has already signed a contract with the Catalans.

The loss of Azpilicueta might leave a huge hole in the defensive unit, particularly on the right side of the backline. At the moment, Reece James is the only known player at right-back for Chelsea.

Tuchel wants to bring in Sergino Dest to help tackle the problem. The German is well aware of the delicate scenario in which the American international finds himself, having fallen short of expectations at Camp Nou.

Dest has already been mentioned as a makeweight in a number of deals involving Barcelona’s top targets, and considering the two clubs’ recent business, it will not be surprising to see the former Ajax sensation in the Blue kit next season.