UEFA Champions League holders Chelsea have completed their first signing in the current January Transfer window. The Blues have secured the services of left back Dylan Williams from England second tier side Derby County for an undisclosed fee. 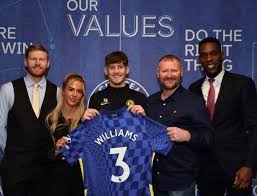 Dylan Williams is now a Chelsea player. The 18 year old defender is the latest young talent Chelsea have brought into their ranks. The defender at his age was already a first team member at Derby County and has made 9 first team appearances this season for the club who sit 2nd from bottom in the English Championship table.

Dylan Williams will reportedly initially link up with Chelsea’s Under 23 squad and begin a quest to make it to the first team.

Williams in a post on Instagram expressed delight at the move and stated that he cannot wait to get started at the club. He thanked the staff at Derby County for helping him at the club.

Dylan Williams may make a strong case for featuring in the Chelsea first team considering that they are short of options in the left back position following Ben Chillwell’s season ending injury.

It remains to be seen what the future holds for Dylan Williams as he starts his Chelsea career.