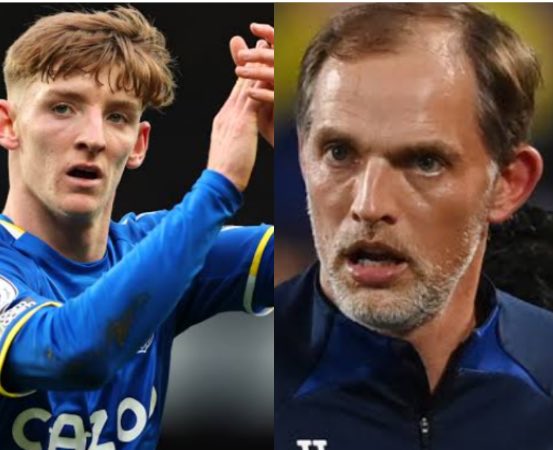 Chelsea are looking to sign Anthony Gordon from Everton and have tabled a £40million bid for the player.

The Blues are looking to sign a right-sided player to provide competition for Reece James.

Everton are believed to value the 21-year-old at least £50m.

Discussions are set to continue this week.

It is understood that agreeing personal terms with Gordon will not be a problem for Chelsea.

Gordon has played against Chelsea this season, during their 1-0 defeat at Goodison Park.

Taylor Should Be Banned From Refereeing Chelsea—Tuchel

Tuchel was sent off along with Tottenham Hotspur counterpart, Antonio Conte after the final whistle following their second clash of the afternoon.

However, the Blues’ boss was furious that Kai Havertz was not awarded a free-kick in the build-up to Spurs’ first goal.

Cristian Romero was also not punished in injury time for pulling Marc Cucurella’s hair with VAR ruling out a red card. From the subsequent corner, Harry Kane headed in to snatch the draw.