N’GOLO KANTE is expected to return to the Chelsea starting lineup against Udinese on Friday night.

Thomas Tuchel intends to present a strong squad for the encounter, only 24 hours before they face Udinese again when marginal players will be given an opportunity.

Kante was unable to go with Chelsea to the United States because he had not yet had his Covid immunisation.

However, he is expected to be part of the team that competes on Friday, and it is nearly probable that he will get some playing time.

It seems expected that Tuchel will start the match with Edouard Mendy in goal and a star-studded back five that includes Reece James, Cesar Azpilicueta, Thiago Silva, and new acquisition Kalidou Koulibaly, along with Marcos Alonso.

After Mason Mount, the £50 million man Raheem Sterling, and Kai Havertz, Jorginho and Conor Gallagher are expected to take over as the second-choice pairing in the midfield.

Other Chelsea players who will compete for a starting spot include Trevoh Chalobah, Mateo Kovacic, and Christian Pulisic, among others

Tuchel will be eager to see a comeback from his players after their 4-0 thrashing at the hands of Arsenal the previous Sunday. This will be the case regardless of who starts the encounter.

Reece James will play right back in a defensive four to show he’s better at full-back than centre-back.

Thiago Silva will play beside him after another immaculate performance against Arsenal.

Kalidou Koulibaly will accompany the Brazilian for the first time after impressing against Arsenal.

Ben Chilwell, who played the second half last time, will complete the defence.

Christian Pulisic was one of the most brilliant players during the trip to his native nation. He’ll start on the right of attack to preserve frontline balance.

Kai Havertz will play the number nine position and must become a more consistent striker after Romelu Lukaku’s departure. 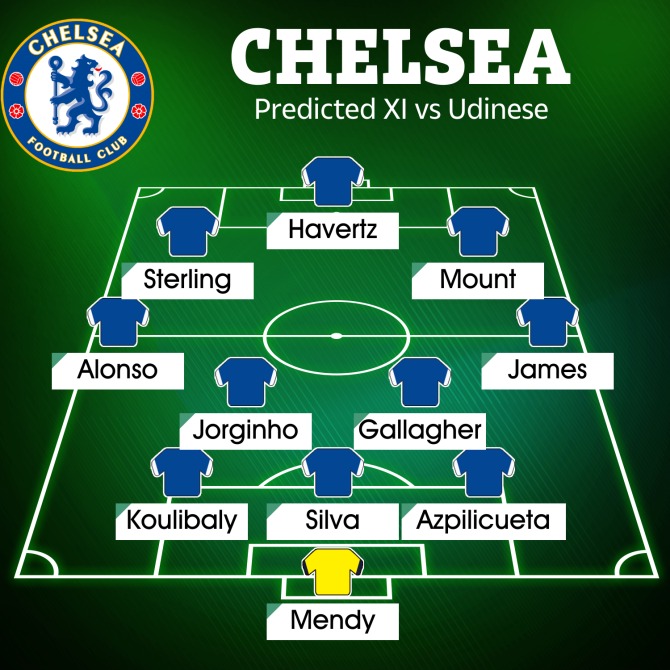