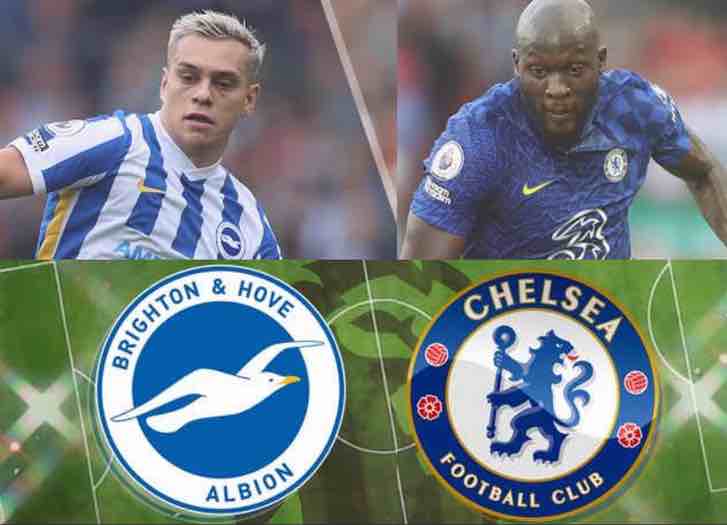 Chelsea no longer appear title contenders as they travel to face Brighton in a rearranged Premier League game tonight.

Thomas Tuchel’s side simply had to beat Manchester City at the Etihad on Saturday to have any chance of reeling in Pep Guardiola’s runaway leaders, but came away empty-handed thanks to Kevin De Bruyne’s wonderful second-half strike.

That result left Chelsea 13 points adrift of City with 16 matches left to play this term, while they’ve since dropped down to third after Liverpool brushed aside Brentford at Anfield on Sunday.

Brighton, meanwhile, are in the midst of a strong season and pulled off a late draw at home to fierce rivals Crystal Palace on Friday night courtesy of Joachim Andersen’s own goal

The Seagulls are on a five-match unbeaten run across all competitions and nestled in the top half of the table as they continue to take impressive strides under highly-rated coach Graham Potter, who has been mentioned as a potential candidate for the vacant Everton job.

Brighton vs Chelsea is scheduled for an 8pm GMT kick-off on Tuesday January 18, 2022.

The match will take place at the Amex Stadiumin Brighton.

Where to watch Brighton vs Chelsea

TV channel: The match will be televised live on BT Sport 1 and BT Sport Ultimate, with coverage beginning at 7:30pm.

Live stream: BT Sport subscribers will also be able to watch the action unfold online via the website or BT Sport app.

Brighton remain without Enock Mwepu, Jeremy Sarmiento and Jason Steele due to injury, while key midfielder Yves Bissouma is away at the Africa Cup of Nations with Mali

Captain Lewis Dunk, Shane Duffy and Adam Lallana also look set to be sidelined on Tuesday, but Tariq Lamptey will be fit to start against his old team after coming off the bench versus Palace.

Chelsea remain without Andreas Christensen due to Covid, while fellow defenders Reece James and Trevoh Chalobah are still out

Edouard Mendy is at the AFCON with Senegal, where he has also been dealing with Covid, while Ben Chilwell has been lost for the season after knee surgery.

Mason Mount is expected to return to Chelsea’s starting XI after being restricted to a late cameo against City.

Brighton battled to an impressive draw at Stamford Bridge on December 29, with Danny Welbeck netting a last-gasp equaliser to cancel out Romelu Lukaku’s first-half goal.

City hammering aside, the Seagulls seem to generally fare well and raise their game against the bigger teams, though Chelsea boast the top-flight’s second-best away record.

While it wouldn’t be a shock to see them drop more points as they continue to struggle to utilise club-record signing Lukaku’s best talents, we’re backing the Blues to take out their frustrations from the City game here with a morale-boosting victory.