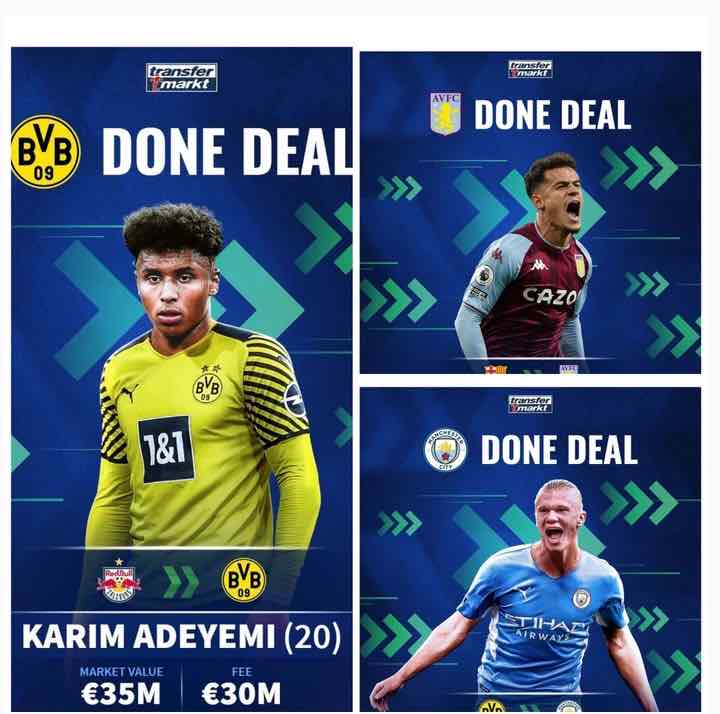 Borussia Dortmund has completed three transfer deals in May. The German team sold Erling Haaland to Manchester city and Brought in Karim Adeyemi and Nico Schlotterbeck. The former Salzburg player is expected to replace Haaland at the club after an incredible career at Austria. Schlotterbeck will strengthen Dortmund’s defense next season as the German club conceded alot of goals this season. Despite the sale of Haaland, Dortmund has already completed three signings and could add more before the start of 2022/23 season. They are currently building a team capable of Challenging Bayern Munich for the Bundesliga title next season. However, Phillipe Coutinho who loaned out by Barcelona to Aston Villa will be joining the English side on a permanent deal. The former Liverpool forward is currently enjoying his newly found form under the tutelege of his former teammate Steven Gerard. The 29-yeat old will be crucial for Aston Villa in the 2022/23 season. Coutinho is expected to start in Aston Villa’s finals premier league fixture against the League leaders Manchester city. Could the Brazilian forward foil Manchester city title hopes by handing them a defeat on the final day of the season? In the beginning of May 2022, Borussia Monchengladbach announced that they Matthias Ginger will join Freiburg at the end of the season. The talented footballer will still feature in Bundesliga next season but for a new club. Which of these players do you think will do well in their new clubs next season?